Spawning Sea Lamprey, Sediment Transport & 20 Other Things I Didn't Know Until We Started Dismantling Dams On My Childhood River

When Jeff Yates was 11, he joined Trout Unlimited as a member of the local Mianus Chapter.

At that time, the chapter was mostly a fishing club, but that changed when wild brown trout were found spawning in the local Norwalk River four years later. Habitat restoration to protect the wild trout became a staple of the chapter efforts - and central to Jeff's life outside of school.

What became clear early on, however, was that removing dams along the river was the only way the wild trout were going to have a fighting chance in an era of climate change. So for nearly 30 years, volunteers became ardent advocates for dam removal - pushing and prodding and slowly getting attention for the need to tear down these dams.

When it happened - for the first time in 2018 with two dams removed in one summer - and now with three more dams on the chopping block - celebration was inevitable among TU members, trout anglers and the surrounding communities. What came next, however, took Jeff and many others by surprise.

It turns out, removing the dams wasn't about trout at all. It was about so much more and has already led to so many amazing changes in the river.

Tune in on Friday, July 16 at 4 p.m. to hear Jeff's story, to learn how dam removal alters ecosystems and to find out how you can be part of the revolution in river reconnection! 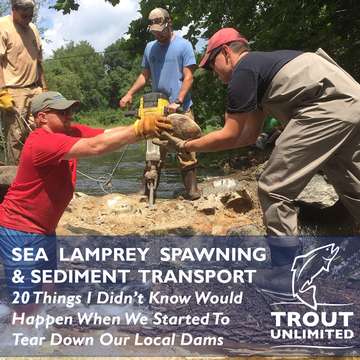 After you purchase tickets you'll get instructions and a link to attend the event online. wifi
Your confirmation email lets you attend online when the event starts. Just click the ATTEND Link.
© Trout Unlimited 2021