Salmon swim 850 miles from the ocean to Idaho each year. But it's time for bold action to remove the four lower Snake River dams - the only chance these migratory fish have of making a comeback.

Join Tight Line Media CEO Kris Millgate, as she shares a unique road trip with us.

Ocean to Idaho visually documents salmon migration 850 miles from Oregon’s coast to Idaho’s wilderness through four river systems, including the Snake River. Follow the journey during this half-hour film where Millgate interviews the people of the Pacific Northwest — farmers and fishers, dam builders and dam breakers — who have a stake in the narrative of disappearing salmon

Following the film, you'll hear from Greg McReynolds, Intermountain Director for Trout Unlimited's Angler's Conservation Project and get a chance to ask your questions of both the filmmaker and conservationist.

Participants can dive deeper with Millgate on her journey by purchasing her new book My Place Among Fish the follow-up to her first memoir, My Place Among Men, as she migrates with Chinook salmon, the kings of the Pacific Northwest, from the Oregon coast to the Idaho wilderness. Millgate will donate 10% of all paperback sales from Sept. 27-30 to Trout Unlimited.

Her solo travels during the height of the COVID-19 pandemic prove more challenging than anticipated, but those she meets along the 850-mile river route shine light on one of the most fascinating sagas for endangered species.

Millgate graduated from the University of Utah with a degree in broadcast journalism in 1997. She worked for several TV news networks before founding Tight Line Media in 2006. Millgate is a leading member of Outdoor Writers Association of America, a life member of Trout Unlimited, and an Idaho Master Naturalist. She’s also a mom, a fly fisher, and a trail runner. See her work at www.tightlinemedia.com 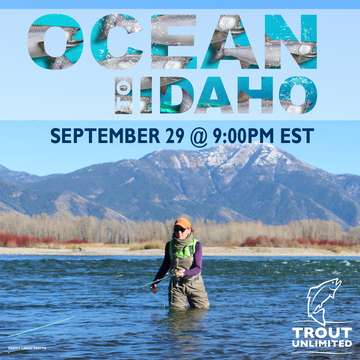 After you purchase tickets you'll get instructions and a link to attend the event online. wifi
© Trout Unlimited 2022